The UFC – and therefore by extension MMA – is in crisis.

That might seem like an odd thing to say when the UFC’s owners, Las Vegas casino entrepreneurs the Fertitta brothers, have just sold the business for four billion dollars. Its events are more popular than they’re ever been. “UFC” has all but replaced the term “MMA” in the cultural mainstream (even the BBC seems confused). But the crisis isn’t financial; it’s moral, philosophical and aesthetic. And so from most people’s viewpoint, there’s no crisis whatsoever.

The UFC’s design sensibility is irredeemably backward, still frozen in a late 90s/early 2000s idea of badassery, where murky grey and brown logos frame scowling fighters as dire nu-metal grinds away in the background. Like the vast majority of sport broadcasting the UFC insists on providing only the most banal and dull analysis and insight, the dreaded process of “telling a story” which sees two athletes reduced to offensively flat caricatures of themselves. The defeated champion versus the up-and-coming challenger. The wayward psychopath versus the rock-solid golden boy. Almost all of the UFC’s main fights fit one of these two narratives. The deadening lack of innovation and self-awareness suffocating football discourse was one of the main reasons why I simply stopped watching it in 2008, after two-and-a-half decades of fervent interest, and while it’s easier to escape the “conversation” (really a monologue) which the UFC provides it’s still deeply irritating that such a nuanced and fascinating sport is continually hobbled by the shortsightedness of its main promotion. 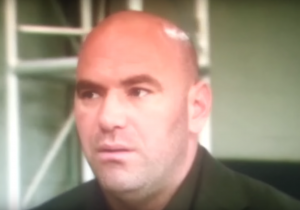 Indeed the UFC’s driving force, Dana White, seems at times to be fundamentally opposed to taking any decisions which would help MMA to mature. He’ll remain with the company for the time being, which is unfortunate: White’s history of hypocritical and callous behaviour could literally fill a book. His response to the great Fedor Emalianenko’s first loss is a classic example – bitter, vindictive, the absolute refusal of the dominant man to display any graciousness to his enemies. White is only interested in or pleasant to fighters when they’re making him significant sums of money. Brock Lesnar’s disgraceful arrogance and hostility during his first UFC tenure was music to White’s ears, because it led to more publicity. Contrast his reaction to Paul Daley’s unsporting behaviour. Daley is a talented fighter without Lesnar’s stellar box-office potential, and so White excoriated his behaviour. Witness Dana’s rage when Bobby Southworth dared question him. Wince as a battered Wanderlei Silva, a great fighter, presents himself in meek supplication before White after his UFC début, terrified that he won’t be invited back. White doesn’t even have time to fully enter the room. Listen to White’s rage when a respected journalist has challenged his narrative. Look at the way he gleefully presided over Conor McGregor’s spiteful bullying of Jose Aldo and allowed cameras into Aldo’s dressing room after his loss to McGregor. During Aldo’s decade-plus in professional MMA he had combined impeccable performances with integrity and humility; White allowed McGregor to destroy him. The US has a culture of boss deference which is alien to us here in Europe; we generally prefer to believe that our boss or manager has less control over our lives than they do. In the US, there’s no such pretence, and White leverages this unpleasant truth to the hilt, compensating for his physical unloveliness with constant and egregious displays of bullying. He is almost uniquely unappealing. He has the florid huskiness of a distant cousin’s fiancée and a restless tongue which constantly probes damply outside his mouth. He insists on referring to professional athletes as “kid” and peppers his conversation with the banal invective of a youth offender. He is, on a foundational level, better than what he has become, but he has inhabited the shell of the ruthless promoter for so long that he no longer remembers that there is any other way to be. Presumably he isn’t stupid; but the way he presents himself to the world – constantly baffled, angry and perspiring – suggests otherwise.

White’s role is gleefully bolstered by his mirror image majordomo, Joe Rogan. Rogan is the spinoff version of White, the neon holo-foil package Extreme Max Hyper edition. Both men are bald and broad but where White is a damp pseudo-Irish lump Rogan is a desert-blasted TRT-sculpted superbro. Rogan is apparently a professional comedian; much like Brock Lesnar (more of whom below), he balances two careers which are weird inversions of one another, comedian and UFC media presence. His stand-up routines are screamingly unfunny. His radio show is marked by its complete absence of fun or humour. His fight commentary is repetitive, lags behind the action and singularly fails to illuminate any of the action. His main concern when commentating seems to be reminding us that he himself is a fairly accomplish BJJ practitioner. Rogan is talentless and deeply irritating, so needless to say: his social media reach is gargantuan and his popularity is bulletproof. He is White’s unerringly loyal hatchetman, prepared to publically shame injured fighters in astonishingly passive-aggressive interviews. He’s positioned himself as a maverick outsider and his podcast and stand-up audiences cannot seem to get enough of him. Away from the UFC, he’s fearless in expressing his opinions and he’s performed admirable work in calling out joke-stealing comedians, and he’s hardly the only talentless person who’s attained great success in a public arena. In fact, that’s part of his appeal. For many UFC fans their dream job would be hearing the sound of their own voice as they pontificate on their pet subjects. Rogan is admirably outspoken on a number of subjects – drugs, sexual politics, the entertainment industry – but his soi-distant role as a speaker of truth is curiously deficient when it comes to calling out the UFC on its hypocrisies. That’s unsurprising. Who of us would bite the hand that feeds us to the tune of several million dollars a year? But Rogan’s weaselly, smarmy acts as White’s media hatchetman go beyond “I’m alright Jack” inaction and cross over into downright despicable territory. The way he grills fighters who’ve failed to make weight, insinuating they did it on purpose. His silence on the Reebok sponsorship debacle, which negatively affected the earning prospects of the vast majority of the UFC’s roster. And the way he supported Dana White’s decisions to fire the person who thought Rogan should, y’know, abide by the organisation’s drug policy. (Surely this would be a slam-dunk unfair dismissal case for the fired UFC staff member?)

Neither man, though, demonstrates the core of the UFC’s problems like Brock Lesnar. Lesnar is perhaps the supreme exemplar of those true American values which the UFC represents. His first tenure in the UFC was marked by shocking disrespect and contempt for his opponents, the press and MMA fans. Needless to say his behaviour resulted in record-breaking ratings. Lesnar’s day job – as a kind of glistening clown, a “performer” in scripted sports entertainment wrestling – is a perfect example. He’s made himself fabulously wealthy through leveraging genuine world-class athleticism to portray a cartoonish version of himself who takes part in pre-determined bouts which are only rarely acknowledged as being pure theatre. Yet he goes by his real name in professional wrestling, just as he does in MMA. And his wrestling persona doesn’t seem to be different in any appreciable sense from his “real” public character.

Watch his pre-UFC 200 press conference to witness the moral power of excellence and wealth, the way normal rules of morality simply do not apply to men like Lesnar, either in their own head or in any other sphere. Brock knows that he’s lying here; he knows that he’s a heavy user of performance enhancing drugs, as are the vast majority of top-tier professional wrestlers. He doesn’t care. There’s a smirking glee to him as he essentially dares the (breathlessly compliant) reporters present to question his breathtakingly hypocritical statements. Brock knows that the money he brings in to the UFC makes him invulnerable (don’t forget that by the time of this press conference the UFC already knew that he’d failed drug screening tests). He is more than prepared to step into an MMA cage and seriously hurt and injure his opponent. He’s a winner; normal rules don’t apply. Even his statement after the revelation was high-handed: we’ll get to the bottom of this.