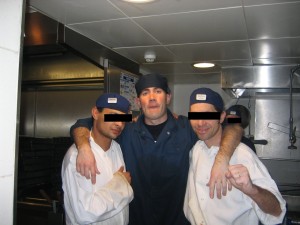 Myself and some of the Portuguese guys (none of them are Anderson).

Anderson had a harelip. He had been an architectural draughtsman back in Portugal, but he was able to earn more working for the minimum wage in [redacted], a Japanese restaurant in Bristol. Anderson claimed he couldn’t smell anything – whether it was because of the cleft palate operation he’d had as a child or due to the thirty-plus rollup cigarettes he smoked every day, he couldn’t say. He worked fourteen hours shifts, six days a week, and would have worked seven days a week if the mangement had let him. Anderson worked so hard because his mother needed a heart operation. Over the year I worked there with him at [redacted] he saved up for, and paid for, three operations for her.

All of his backstory seemed perfectly plausible at the time. Now I’m not so sure.

I worked at the restaurant four or five times a week, washing plates, cutlery and kitchenware, while studying in the city. I was attending Bristol University, a prestigious establishment, and I did not fit in. My degree didn’t exactly pile on the contact hours – three lectures a week, all on Thursdays – so it seemed like I was at the restaurant a lot. I still remember burning with shame one shift when Anderson pointed out that I never brought in any drinks or snacks for the kitchen. Most evenings one of the Portuguese or Brazilian lads would buy a bottle of Coke or lemonade and some chocolate. I was mortified to realise it was true; I had just never given the idea a second’s thought. I was angry that Anderson would think I was a freeloader and I was angry with myself for never having thought to buy some stuff before a shift and bring it in, giving the others reason to think I was a scrounger. I ran straight across the road to a branch of one of the UK’s omnipresent coterie of oddly, profoundly depressing supermarket chains and bought drinks, sweets and chocolate. From then on I made sure to bring snacks in regularly.

Ironic now that I would ever have worried about Anderson’s opinion of me where finances were concerned.

I took some pride in the fact that I was the only native English speaker in the kitchen. Most of the staff were lusophones, hardworking, invariably cheery Portuguese and Brazilian guys, connected in a mystifying gossamer of familial relationships: cousins, nephews, in-laws. Anderson’s own father, José, worked there as a potwasher during the day, but the two of them were estranged and did not acknowledge each other – despite living and working together. Anderson, along with Juliano, a Brazilian from Curitiba, was my best friend there, though I got on well with almost everyone. Siva, a silent Sri Lankan, was the only kitchen staffer I didn’t click with. (Siva didn’t click with anyone.) All of the Portuguese and Brazilians had ridiculously sweet tooths. Juliano would pour four spoonfuls of sugar into a small cup of water and squeeze in some lime juice before downing it in one. He had a blackened front tooth, deadened by sweeteners. One of our rituals was to steal a piece of the horrifically over-priced chocolate cake and hide it from the head chef in some needlessly elaborate place before clandestinely eating it piecemeal over the shift.

I already spoke Spanish and soon learnt reasonable Portuguese. There was a paradox to my life at the time: I was ostensibly working at the restaurant to fund my studies, but as I was working all the time I rarely went to university. I enjoyed thinking of myself as some kind of noble working-class scholar, someone following in the tradition of the night-schooled self-made Great Men of history.

I spent my time when I wasn’t working lying in bed listening to music or watching children’s sitcoms on Nickelodeon.

The front-of-house staff at the restaurant were, broadly, annoying, condescending and good-looking, with a few very pleasant exceptions. Plenty of them went to my university but that was where the similarities ended. I was more or less an immigrant labourer, physiologically, culturally and fiscally, if not statutorily (although I had emigrated to the UK in 1986, it was only from Ireland, one of the smallest and least exotic immigration moves it is possible to make). I felt odd, defiant, on the occasions when I bumped into the wait staff around uni – the separation between us at work was so clear that I took great pleasure in reminding them of the equality of our scholastic status: saying hello with a big smile. The likelihood is most of them never gave it much thought, but at least two of them were shocked to discover I was an educational compatriot. One waitress had assumed I was Polish and was surprised to hear me speak English.

By the summer of 2005 I had been working there for a year. I was set to go to Venezeula with a friend in July – I had foregone the scanty pleasures of drinking and socialising for a year or so, working instead of gulping down cut-price goblets of glowing, sticky alcohol served in venues playing music I despised rammed with people who disliked me. By June I had saved over £1,000 – not bad at all, certainly more than enough for a very good holiday in Hugo Chavez’ socialist paradise. A month before departure I was lucky enough to unexpectedly receive a further £2,000 or so from the sale of my grandfather’s house – he had died some years previously and my aunt and uncles had generously given my deceased father’s share to myself and my brother. Care costs for my grandfather’s dotage had accounted for most of the money but I was thrilled to get a nice little lump sum.

Three weeks before I was due to go Anderson came into work with some distressing news. His mother had taken a turn for the worse and was unlikely to survive without a further operation, an operation he was still some months away from having saved up for. It would cost £1,800.

Straight away the idea of loaning the money to him occurred to me. At first it seemed like a ridiculous thing to consider – but I began to feel increasingly guilty planning waterfall excursions and rainforest daytrips while I knew of his situation.

I was actually pleased when I finally resolved to make my offer, a few days after the idea had come to me. It was a relief to be rid of the guilt; and I felt like it was the kind of thing the person I wanted to be, rather than the person I actually was, would do.

I told him I would lend him the money he needed – he could get the operation for his mother now and pay me back in a few months. He wasn’t particularly effusive in his gratitude. Now I think he didn’t really believe that I’d help him out.

I wasn’t worried about the money. I felt certain that the many hours we had shared working together and bullshitting about everything under the sun were more than enough guarantee of repayment. I felt quietly smug, self-satisfied: I was a good person. The day I gave him the money he signed an I.O.U. on an order ticket, the cheapest paper you can get, that grey recycled-recycled-recycled stuff, and I wonder now what legal status that scrap of paper might have. It’s still in my mum’s attic somewhere. I realise it might seem a bit weird that I asked him to sign an I.O.U. – had I really been sure he’d pay me back? But the truth of it is, I just thought it would be funny; a touching souvenir of our friendship in years to come. I envisaged bringing a future wife and children on bi-annual retreats to some enticing habitação of his, imagined Anderson recounting to both his and my kids the legendary tale, the astonishing act of generosity which had sealed the friendship between the two families.

Basically I convinced myself that we were much better friends than we were.

Before I brought the money in I looked up the word for loan in the dictionary: empréstimo. “No e um presente”, I said, possibly incorrectly. “E um empréstimo.” He nodded: of course. Shook my hand and looked me in the eye. We then had a surprisingly vociferous argument in the changing room – he wanted to walk home as usual at the end of the shift with the money. He lived in Easton, a rough part of what is a fairly rough city in places, crammed into the apocryphal immigrant workers’ dosshouse, four to a room. I told him to put the money in the office safe until the end of his shift and then get a taxi home. There was no sense risking all that cash for the sake of a fiver in taxi fare. My shift finished at dinner time so I don’t know if he did take a taxi or walk. Regardless, he told me two days later that he had sent the money to his mother. “Ti e uma tipo raro”, he said she’d said – you’re a special person. This jibed nicely with my own personal analysis of myself.

In the weeks before I left for Venezuela, Anderson told me his mum was doing well. I felt like one or two of the deeply snobby, deeply attractive waitresses who all but shunned me normally were less cold than usual. I certainly hoped that the story of my loan had spread around the staff.

I have actually saved someone’s life, I would think to myself from time to time.

I’m embarrassed to admit this now but more than a few times I felt stinging little twinges of resentment that his mother never wrote to me to thank me.

Anderson was due to return to Portugal to marry – supposedly for the third time – late that summer. His bride was beautiful and nineteen; he had shown me photos and letters from her. He would be gone when I came back from Venezuela but we would see each other again in the autumn when I began my final year of schooling. I hated Bristol and most of the people I had met there so I was looking forward to moving on with my life, but I was sure that Anderson at least would be a lifelong friend. I texted his Portuguese number over the summer a few times and received no reply.

Do I really need to finish the story? Do I really need to tell you what happened? What happened was: nothing. He never came back to the UK, at least that I know of, and I never heard from him again. His mother died over the summer, according to his father. The trip to Venezeuela was, of course, a huge, expensive disappointment. I think his mother was genuinely ill – certainly this part of his story was something he told me very soon after I started working there, a year before I inherited the money I would lend to him. I also think that he didn’t know I had money saved up and money coming to me before his mother had her crisis, but who knows? Maybe he made it all up.

I think he just got back to Portugal, had his wedding, and decided he’d keep my money. Maybe he saw it as a waste when she had died anyway. Why not keep it? What the fuck could I do?

I’m not sure what I learnt from the whole thing: nothing, really.