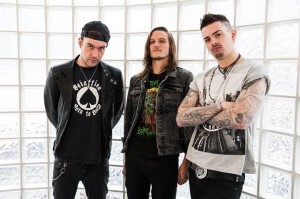 Beretta Suicide have just released their self-titled début album. A trio made up of my brother Joey (bass/vocals), Joe (guitar) and Pert (drums), they play hard rock, and they’re from Leeds. You can listen to their music here. I sat down with Joey and asked him a few questions.

Jamie Dodd produced this album – he’s just done Orange Goblin’s last LP. What was it like working with him?

Jamie’s a good laugh and knows what he’s talking about. He made a few suggestions, particularly around phrasing – how I should sing the songs. I liked working with him. I enjoy bouncing off other people, sharing ideas. Hearing their input.

Tell me about some of the songs you like on the album. 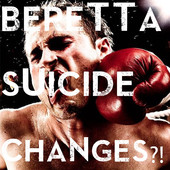 “Changes?!” is the first single, right? What does it even mean nowadays, having a single? Because people can just download any song they want.

The only difference is that it has a video. I was thinking of an AC/DC, Danko Jones vibe. I was listening to a lot of Danko Jones at the time. Trying to reflect those two artists. 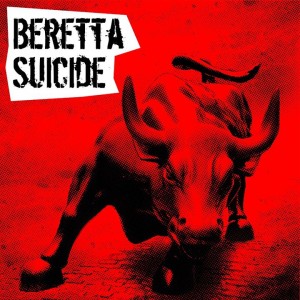 I think it’s the other two lads, they bring in quite a lot of influences.

What does Pert listen to?

He’s got quite broad tastes… I think it’s just a mish-mash.

[laughs] In the days we live in now you can listen to whatever you want for free, can’t you?

People always talk about you as a punk band or a punk rock band.

You just put the music out there and see what happens and people come back to you. It’s just like, “oh, okay” – it doesn’t bother me.

It doesn’t bother you if someone says you’re influenced by Motörhead and you’re not.

It’s like – I’m not the world’s biggest Motörhead fan but I’ve got an apprecation of them.

What about the Pistols? Because I’ve never heard you listen to them, ever.

I don’t mean you’ve literally never heard any of their songs. I just mean you haven’t sat down with a Sex Pistols CD.

They’re just a good tale, an important part of rock music. They would have had such a massive effect on those who came after them. Everyone’s listened to the same stuff generally.

So what would be that seedbed of music for you?

Probably started with Queen when I was younger. Then Guns & Roses and Aerosmith. Then Wildhearts, Black Halos, Dogs D’Amour. As something you aspire your sound to be like because those are the ones who made me feel the best when I first heard them.

There’s almost like a classical ascectisism to your CD collection. I remember you saying “I like anything as long as it’s The Wildhearts”.

It was different when I was a teenager. You read about it, you maybe heard a few bits and pieces from it, then you bought it. You spent a long time with it once you’d bought it. You used to spend £15 on a CD, you’d spend more time on it, you were more invested in it. Whereas now I’ve just gotten onto Spotify.

…and then ten years later that album is still central to your musical background.

There are certain albums that I’d just buy again, if I lost them. To not have them… ones by those artists I mentioned before. Guns & Roses, Wildhearts, AC/DC. If you didn’t have Back In Black about it’d be strange.

So when did you first start getting interested in music?

Probably when I was thirteen, fourteen.

I remember you were interested in music from the age of ten or so.

Yeah, just stuff your parents like and stuff. The first song I remember liking was Rhinestone Cowboy. Is it… Glen…? I watched a documentary on him recently.

Is he a tragic figure?

No, he’s just a massive country and western star. I think he had about four marriages and a coke addiction. He’s still alive – I think he’s had a few strokes.

Can you remember the first music you bought, the first thing you owned yourself?

It would have been the Flintsones movie song by the B-52s.

Oh, it was just a version of the theme.

Yeah. I think so. I bought the tape.

You would have been seven or so.

Other one I can remember is “Spaceman” by Babylon Zoo.

Someone taught you to play bass a bit at 14. Then at 15 you started playing in a band at school.

Black Dog. It was just having fun at school. Loads and loads of covers. Maybe one or two originals. We were just obsessed with Guns & Roses. Anything from them or that sounded like them.

How did you get into G&R?

Just a friend showing me. Just great songs – how the guitar pieces are worked out.

When you were fifteen did you like the stuff about booze and hookers? Did you associate the music with the lifestyle?

I think we just had a concept that it was generally badass, you know? But you’re not really into specifics of sex and drugs at that age. It was just kind of… yeah.

So how long did Black Dog last for?

Just while we were at school.

What is  the long-term vision for the band?

I really don’t know, to be honest with you. Just keep on truckin’, I think. It’s impossible to see into the future. While you’re still doing it, while you’ve still got your hand in it – anything can happen. Just keep enjoying it.

And are you enjoying it? What do you enjoy?

Yeah. Doesn’t bother me at all. Just getting in the van and going somewhere. Especially somewhere you haven’t been before. Seeing little towns you’d never have gone to unless you were doing something like this.

That’s cool, because you’ve been doing a lot of travelling. And you’re gonna have to do even more.

Well, it’s just something – everyone thinks, “ooh, fucking hell” [doing that amount of travelling], but none of us in the band are bitching  or moaning. Even when you feel terrible.

Yeah. It’s just good seeing little corners of the country you wouldn’t ever have gone to.

And do you feel like it’s something most people will never do, touring round with a band?

Um, no. When you’re doing it you meet a lot of people who are doing it, so it doesn’t feel strange.

No. You’re hanging around with people who are doing it.

You went to Europe with The Misfits. Guilty?

That’s the only time you’ve been abroad touring so far. What countries did you visit?

What were the crowds like in the different countries?

Out of all of them, Spain went really well for us. We only played one gig in Portugal. In Portugal they were all dudes. Everyone just looked cool – and hard. Both cool and hard at the same time.

I can tell you now, that’s one of the hardest tricks to pull off.

A little bit more reserved than Spain. We met a lot of interesting people there. In Spain they all got there early for the gigs and were up for a good time – quite happy, quite care-free.

You just brought some joys into their lives. With the economic situation.

You mostly slept in the van? In hotels? Or bed and breakfasts?

We mostly slept in the van. I think maybe one or two nights we got rooms in Travelodge-style places.

Did you get a decent sleep in the van?

Take me through the creative process – who writes what, how does it start.

Ideas are just knocked about. If they take hold quickly and easily then they’re worked on. If they don’t, they’re discarded.

So it either has that spark straight away or it doesn’t. In terms of a riff or a vocal.

It seems like a fairly safe way of quality control. If it gels quickly, we stick with it. If it feels like work, if you’re labouring away on it, it’s not going to work.

What do the three of you contribute individually?

Often I’ll take a seed of an idea to them. Then we’ll work on it. Just a bit of guitar and an idea of a rhythm.

You write all the lyrics? Are the others allowed to offer stuff?

They’ll chip in with lines. There’s no template. I don’t insist on it all being my lyrics or anything. It’s all a three-way enterprise.

The initial lyrics come with the music?

Probably Carlsberg. You see a lot of Carlsberg knocking about.

Exotic. So if you could drink any beer in the world, it’d be Carlsberg.

I always forget about Cobra! It’s so nice.

It’s not as nice from the tap as it is in bottles.

You don’t see it in the pub very often.

Just… quite debonair, I think.