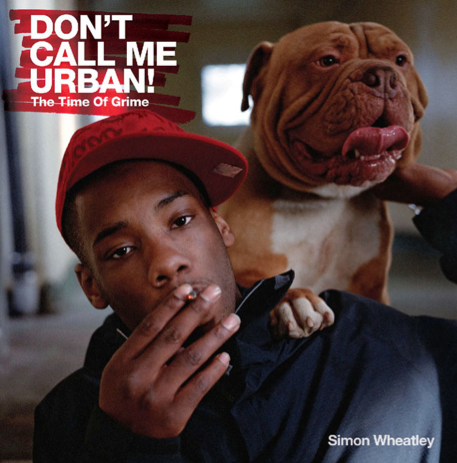 Don’t Call Me Urban! is a coffee-table book chronicling grime, the very British, very aggressive fusion of abrasive electronic beats and hyped-up MCing which burst out of east London a decade ago. Simon Wheatley’s book combines striking photographs of grime’s protagonists with text detailing his twelve-year involvement in the scene. Nowadays scene originators are, variously: playing giga-festivals like Glastonbury (Wiley); in prison for murder (cover star Crazy Titch shot dead a sixteen-year-old who disrespected him in a freestyle); topping the UK pop charts (Wretch 32); and driving buses in south London (hold tight, Mr Wong). Grime had a particular resonance for the urban youth of Britain – it was home-made, resolutely DIY, and proudly local. Like punk and acid house before it, grime gave a voice to people from marginalised areas and backgrounds. (Many of grime’s movers and shakers were black Britons of Caribbean or African heritage, but there was space for white and Asian kids too. The title comes from one MC’s frustration at his music being labelled “urban” simply because he’s black. Wot Do U Call? by Wiley tackled the thorny issue of nomenclature too.)

Wheatley’s book brings home the local scale of the grime movement, how it really was a sound – and lifestyle – which exploded from genuinely street-level roots to something which briefly commanded international attention. His photographs and accompanying text don’t just focus on the stars of the scene but provide compelling vignettes of the people who got left behind or never even went anywhere – the ordinary teens making music and surviving in some of the toughest parts of London. The book makes clear the links between criminal lifestyles and grime music, how many of the studio sessions and record pressings were funded by drug sales, and how petty squabbles and territorial beefs complicated the careers of so many grime artists. The music reflected the life and the life was built around the music.

The text is well-written, a clear and evocative account of the people Wheatley spent time with, and it’s a refreshing change to read a coffee-table book which actually provides a decently meaty narrative. The flipside is the way the stories remain unfinished, cut off as Wheatley simply loses contact with the people he’s been photographing. Particularly poignant are the brief paragraphs detailing the few times he met Delusion, a teenager on the periphery of the grime scene. During rides in Wheatley’s car (the journalist is a useful chauffeur) Delusion is unexpectedly wistful and opens up about the troubles in his life. He soon drifts out of touch with the photographer, one of the ones who didn’t make it.

There’s a core of sadness in Don’t Call Me Urban!; The missed opportuntities, the victims of violence, the people behind bars – even just the way so many of the people Wheatley meets drift out of contact. The photos themselves illustrate, again, the provinciality of grime, its inescapable link to the grey dampness of British life. The kids in the photos wear old trainers and tops which have seen better days. The sky is overcast. The streets are filled with rubbish. Some of the artists talk of worldwide record and clothing empires, but Wheatley’s photos fall on the side of the MC who sees grime as a hobby, a bit of fun for evenings and weekends. The images range from posed mean-mug portraits to unguarded moments of happiness or reflection. A horde of young lads in their early teens desperately scrabble for the microphone at a youth club. Delusion stares blankly into the distance, eyes lidded as he bags up weed. A teenager plays his new song for an expectant extended family.

As we begin 2014, it’s hard to know what to think about grime. Opinions vary: Grime is dead. Grime is more popular than ever. Grime is a hermetically-sealed, calcified musical style which is locked into a downward evolutionary spiral. Grime is influencing and being influenced by dozens of other types of music as (some of) its luminaries top the charts and team up with bonafide mainstream pop stars. Wherever grime is now, Don’t Call Me Urban! brings it back to where it all began: young people on the streets.

CORRECTION 13.08.2015: The book’s author, Simon Wheatley, emailed me recently to point out an error in my review. The original version of this review talked about Delusion having a young son; it was another figure in the book, Complex, who had a family. I apologise for my inaccuracy. The original version also said that Simon met Delusion “a handful of times”, and my reading of the book was that Simon’s association with many of his subjects was fragmented and temporary, but Simon also informed me that he is still in regular contact with plenty of the people he photographed, over ten years after starting the project; for example, he met Delusion “a lot more than a handful of times” and still sees him occasionally. Don’t Call Me Urban! is now being re-released as an iPad app, available here.