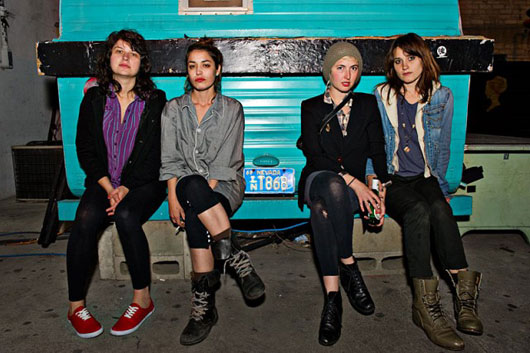 Warpaint’s new self-titled album builds on the promise of their 2010 début The Fool, effortlessly intertwining dusky whispers like “Teese” and “Hi” with full-throttle soul-chillers like “Love Is To Die” and “Drive”. Vocalist and guitarist Theresa Wayman sat down with me to talk séances, studio wizardry and English weather.

Congratulations on the album – and also Warpaint’s 10th anniversary!

There’s a kind of open, hazy shimmer to songs like “Keep It Healthy” and “Drive”. That’s always been part of your sound, but did [producer] Flood bring that out even more? He was behind so many of those huge, chilly late 80s and early 90s records.

With “Drive”, it feels like this big, dramatic soundscape. There’s an undercurrent going on through the whole song, like a roaring river or something. “Keep It Healthy” just sounds so much like a Warpaint song to me that it’s hard to imagine it being compared to anything else. Flood’s a wizard! At this point in his career, he just stands back and commands the machines to work for him, and they do, because they love him. They work really well for him.

What kind of specific things did he do to come up with the album’s sound?

He was just casting little spells here and there. It’s a mystery, really – it just comes out at the end. Only he knows. The biggest surprise was when we were mixing and he put the first song up on the board. He said “okay, give me a minute, I’m gonna start this off and get it going, then you guys can come in and tell me what you think.” It was amazing when we came in to listen; he’d really given the song life. That’s when he’s most powerful, I think. In front of the board, mixing, placing the parts of a song in relation to each other within the mix.

Then in contrast “Hi” and “Teese” are so intimate – right up in your ear.

“Hi” is really minimal, so it was nice to make it really clear – I didn’t think that one should be drowned out in lots of atmosphere.

“Biggy” is an extraordinary piece. It’s completely more than the sum of its parts. What’s it about?

Emily wrote the lyrics to that, so – from what I’ve gathered – it’s a pretty personal experience; a little moment to herself. Getting pretty psychedelic. A druggy exploration without the drugs.

Yourself, Emily [guitar, vocals] and Jenny Lee [bass] have all know each other since you were young, I believe.

Pretty much. I’ve known Emily since I was eleven; I met Jen about twelve years ago, so I’ve known her for a while now too.

[Drummer] Stella’s been with the band since 2010 – is she still the new kid at times? Any culture clashes with her being Australian?

Stella’s been with us since the end of 2009. I don’t feel like she’s a new kid at all anymore. I feel like Warpaint has fully formed since she joined the band. I don’t see us being any other way.

With regard to culture clashes, there was a little bit at first. Australians can be – they joke around a lot, which we do as well, but in a really different way. Poking fun. At first I don’t think we really got that. Is she offending me, or is she joking? Are we supposed to laugh with her, or laugh with her laughing at me..? What’s going on? 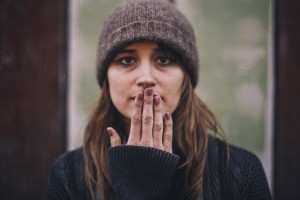 You’ve spoken about making decisions as a collective, sitting down and talking about things and making sure every idea is tried out. I think that could be why you have such a cohesive sound.

That could be why! I’ve never really thought of it like that. I guess our collective voice ends up having a tone of its own, and that is what Warpaint sounds like.

You all have your roles on stage, but from what I’ve read any of you might have been playing anything during recording.

That’s true. We like the feeling of someone playing an instrument they don’t know very well, or know it technically very well. It allows for a new angle, something different. We like to utilise that, it keeps things fresh. Never falling into a rut.

From what I’ve seen, some of the live sessions you’ve done for songs from this album are veering off into more freak-out territory…

Well, we’ve always done that. We’ve always liked to extend the ends of songs, or do little interludes, or find ways to keep the show fresh and ways to keep it feeling like we’re not just playing by the book. We want the audience to experience a moment that no-one else has, or will. We used to jam the end of songs for ten minutes, sometimes. I feel like, as a performer, you just have to do what you want to do and not think about standards; enjoy yourself.

I think “Feeling Alright” is my favourite song on there. It really has that propulsive interplay between the bass and drums.

I actually played the bassline on that one. I always love singing along to drums and bass, and I like writing vocals to bass and drum tracks. I wanted anything else which was put on top of the bass and drums, which were already sounding amazing, not to interfere so the relationship could be heard. I’m sure next time around we’ll do more layering – I don’t know. We’re a really rhythm-based band.

“Disco//Very” is quite a spooky song! It sounds like a coven of witches or something.

As you’ve read in the press, we are satanic. Witchy, hippy freaks. It gets said all the time – that we’re sirens.

Do you get sick of that kind of labelling?

No, I don’t get sick of it. I think it’s funny when that side of us is exacerbated, in a certain sense. I get why it starts in the first place – we’re mystical, we’re from the desert, we’re kind of witchy. I guess! It is a spooky song; it’s like a séance or a chant that would be sung in séance… [SINGS]: Don’t you battle/We’ll kill you. It’s just meant to be a gang song – it’s our group saying “don’t fuck with us”. I think every band should have that, now and then.

“CC”, “Drive” and “Son” make up this great dark trio towards the end of the album. I think the album really builds towards that end section.

You try to think of the best way to wrap up an album. “Son” seemed like the best ending – “Drive” is this really epic, drawn-out, emotional roller-coaster. Maybe you don’t want that too early on. It’s going to put your emotional experience of listening to the album to bed. You go through “Drive”, one of the last purges of emotion, then it starts to go down into something softer and more peaceful. Even though “Son” can be quite sad, it has a peaceful, easy feeling to me.

What’s been a high point of gigging with Warpaint?

We just went to Japan, and that was one of the most incredible gigs we’ve ever played. The venue was incredible, the sound was incredible – it was just an all-round good experience. The Japanese are so attentive and caring, but in a non-intrusive way. That doesn’t make it sterile, either – we did a signing and everyone comes up and shakes your hand and tells you how happy they are that you’re there. Some of them went out of their way to give us really elaborate gifts. But then we played in Leeds last night, and the audience was really wild.

Adelaide and Perth. Sorry Adelaide, sorry Perth. I didn’t really enjoy those dates at all.

Yeah, but it wasn’t Sydney. Sydney was incredible! That’s where she’s from. Those shows – it wasn’t just the audience, it wasn’t their fault. There were some weird timing issues and things. They were just really unresponsive, just standing there. It was like, what’s the point? Maybe they were just tired, they were festival appearances.

You’re in the UK now for a few dates – being from Oregon you must feel quite at home with the weather here?

Living in Los Angeles is difficult for me. Too much sunshine – it’s too bright. Here is just like home. I actually really love it.