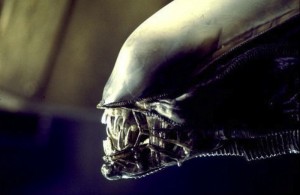 HR Giger, the Swiss artist who created the alien in 1979’s Alien, has died at the age of 74. Giger’s work really was “the alien”: in the thirty-five years since the xenomorph burst out of John Hurt’s chest, the creature has lodged itself in our cultural unconsciousness like nothing before or since. Pre-Alien, space monsters were lame and rubbery. Giger’s creation brought a vicious sensuality and a real sense of threat to science-fiction, a particularly maligned genre. Two years earlier Star Wars had been a huge commercial success and had brought sci-fi back into the mainstream, but none of George Lucas’ non-humans had been particularly scary, or even particularly alien – in contrast the xenomorph was graceful, hypnotic and utterly terrifying. Science-fiction as a genre has since struggled to escape from Giger’s shadow; there’s a long list of movies and computer games which shamelessly crib his designs. Independence Day, Pitch Black and District 9 are just some high-profile examples of the many properties showcasing extraterrestrials “inspired” by Giger’s xenomorph. His creation was too good, too true and too disturbing, such a threatening and dominant archetype of otherworldly evil that other creators can hardly be blamed for stealing it. Giger’s name belongs in that tiny pantheon of people whose contribution to a genre or style has defined it forever: Dr Dre, Stan Lee, Shigeru Miyamoto. “A life of its own” is a lazy phrase, but it’s a fitting one for the xenomorph. Even Giger’s later designs would never move out from under its shadow – for his work on the enjoyably dumb Species franchise he essentially added breasts and a human face to the beast.

Giger had been hired to design for the stillborn Jodorowsky version of Dune when his work caught the attention of Alien writer Dan O’Bannon. In the original film the alien was portrayed by Nigerian graphic design student Bolaji Badejo; willow-slim and 7’ 2”, once he was inside the suit the effect was so convincing that actor Veronica Cartwright was genuinely frightened of him. The creature’s concept, almost obscenely carnal, was born from Giger’s 1976 painting Necronom IV, a nightmarish portrait of a gender-indeterminate skeletal figure which possessed a confrontationally phallic head and appendages. In a masterly adaptation of his idea for the film, Giger made the creature eyeless and added an inner set of jaws which could punch through the skull of human prey. Giger also designed other iconic parts of the franchise’s mythos like the eggs, the blighted asteroid LV-246 and the facehugger – the second stage in the alien’s lifecycle, a kind of tailed crab which orally rapes its victims depositing an embryonic xenomorph into their chest in the process.

It’s relevant that the creature was first presented to us in a superb film: Alien is no B-movie filler. Ridley Scott’s direction is organic and low-key, with the creature not appearing until two-thirds of the way through, and the first half-hour of the movie features impeccable ensemble acting as the crew – simultaneously tough and warm – bicker over bonuses, cook food and drink coffee. A modern blockbuster would never allow for the stars to bounce off one another in the natural dialogue and unfussy conversation of the movie’s first act. Initially it’s not even clear who the star of the film is; no-one’s survival is assured, and Sigourney Weaver’s implacable determination is vitally tempered by her vulnerability and fear. Equally important, the alien is not the only monster. The human characters are, at various points, selfish, greedy and cowardly.

Aliens, the 1985 sequel, is ostensibly an action film as opposed to the outer-space horror of the first movie. There are now hundreds of aliens facing off against heavily-armed, gung-ho marines, but the film is still swathed in a deeply grim melancholy. Roger Ebert described it as “absolutely, painfully and unremittingly intense… [Aliens] filled me with feelings of unease and disquiet and anxiety”. Again, almost no-one escapes; and human venality and corruption are as dangerous as the slavering creatures.

The early films – Alien, Aliens and Alien³ – seemed to cast their own dark spell over those involved. Weaver and Scott went on to commercial and critical success, but Badejo never worked in cinema again. Aliens remains Rebecca “Newt” Jordan’s only role to date. Michael Biehn, Corporal Hicks in the second movie, has struggled with alcohol addiction. David Fincher, one of Hollywood’s most respected directors, found directing Alien³ such a distressing experience that he completely disowned the film. During filming a mysterious noxious gas leak hospitalised cast and crew members. Giger was not involved with Alien³, to his great hurt and dismay, but his creation was so important to him that he continually inundated the production team with unsolicited sketches and notes by fax. The alien haunted him, perhaps, more than anyone.

Giger’s alien is a perfect fictional creation, although later additions to the canon tarnished its legacy somewhat. Alien Resurrection is a tacky mess, while the Alien vs Predator films range from watchable pap to dull garbage. Giger’s creation is now so well-known that the disappointing 2012 re-boot Prometheus completely sidelined the creature until a confusing post-credits scene. (Alien³ divides fans – in my opinion the Assembly Cut, a Director’s Cut not sanctioned by the director, fixes many of the problems of the theatrical release.) As the franchise stumbled along, Giger continued to be shut out while various Hollywood hacks took credit for re-designing or updating his monster. Their changes to the original design were minute and pointless, tinkering designed only to justify exhorbitant fees. “We’ve made the alien taller, broader, sleeker or shorter,” they would burble self-importantly, buried plumply on unwatched DVD extras. “We’ve made the alien’s head longer and its tail spikier,” they’d claim, willfully refusing to recognise that they had basically changed nothing, because Giger’s work could not be improved upon.

Yet despite the best efforts of Hollywood, something of the beast’s power and beauty remains, particularly in the first two films. My first experience with the xenomorph was watching Aliens on a grainy VHS, supplied by a negligent babysitter some time in the late 80s, when I was eight or nine. I was horrified and delighted in equal measure, and the alien stalked me in dreams for months. I became a loyal fan of the franchise, or as loyal as a penniless child could be; reading the half-baked and expensive Aliens comic in the aisles of the newsagent and endlessly re-watching the second film on that copied videotape. As the tape deteriorated the creatures sank further into the blue-black background of the colony’s power station and embedded themselves just as firmly in my head. The alien spoke to me. It combined the most mesmeric features of the least human animals: the snake, the spider, the crustacean. It had no goal beyond the utter annihilation of all other life. It could not be bargained with – mercy, compassion or benevolence had no place in its universe. It was pure hunger and hate. By refusing to give the alien language or culture Giger ensured that it would always remain in absolute opposition to humanity, even while it acted as a dark mirror for our own worst traits.

I was too young to consciously understand the sinister sexuality involved in the xenomorph’s breeding behaviour,  but others have credited this uniquely unsettling aspect of its existence with its enduring imprint. Later I came to realise that there was something perfectly abhorrent about the violation of the facehugger’s kiss, particularly for the hetereosexual male, the key demographic for science-fiction and horror films: it spoke to our darkest fears of subjugation and deviancy. What if something or someone violated me? And, worse: what if I enjoyed it? Giger’s alien is a demented conflation of male and female characteristics, purposely designed to be resolutely sexless and extremely sexual. The sweeping lines of its carapace, its long fingernails and its overpowering instinct to protect its young are female. Its rage and violence and phallic accoutrements are classically male. It moves with malevolent elegance or brutal fury. When the creature takes Brett in the first film it holds his head in its hands, lovingly, as he stands transfixed. The monster’s tail gently winds around his leg, before tapping him almost playfully on the shoulder. It then kills him, puncturing his skull with a single strike of its extendible mandibles. The alien combines its shocking violence with an intimacy that is even more chilling and perturbing.

No other film creation has affected me as deeply as Giger’s work: I still dream about the alien three or four times a year. It represents some unspeakable fascination, the perverse call of the beautiful and deadly. Giger’s death, thirty-five years after giving birth to his unholy vision, serves to remind us that fear lives forever.