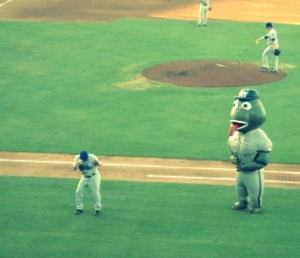 The first rule of WNTs is: never go solo. Walk N Talks are the bane of the mascot’s life. Out on the field, it’s cool: everyone can see you and – barring the odd flinger – people behave themselves. And most costumes can withstand the force of a coin aimed at the head anyway. But the pre-game WNTs are a nightmare, when you’re just mingling with the crowd. So you never go solo. Never. You hear me? If the arena manager can’t give you a UC to watch your back on a WNT – you leave.

A UC. A uniformed colleague.

What the hell do you learn in school these days?

Don’t let them send you out without a UC. I’ve left jobs for less. There needs to be professionalism on both sides. If your AM is sending you out there without proper back-up, leave the job.

With WNTs there are a couple of demographics to avoid if at all possible. First off, groups of drunk men aged 18 – 35. These are near the top of the list for asshole behavior. I’ve been straight-out mauled by groups of these dicks, boozed-up pack animals from Hackensack or Clairton or Brooklyn Park, guys who still live with their mothers and have had the same fiancée for eleven years.

Look at this fucking thing, they say. Then punch me or push me or kick me in the ass. The others braying like donkeys. Fuck those guys.

Then there are the kids. Basically, kids old enough to have started jerking off but not old enough to be driving should be avoided. They’re worse than the roaming sports fans. The failed jocks will hit you once or twice, hard, but they’ll lose interest soon enough. The kids will follow you all fucking afternoon, pouring drinks on you, shouting stuff at you, throwing shit. Most of the time they don’t even have tickets, they just live near the stadium. The kind of kids whose mommies drink and who don’t have dads. The kind of kids who bring firecrackers and knives into school and tell their homeroom teacher that she’s a fucking bitch. Straight to her face. You’re a fucking bitch Miss Kolawski. You know the type. Those kids who eat popsicles for breakfast and take money out of their stepdad’s jeans.

But they’re not the worst. The worst – the very worst – are drunk bitches with drunk boyfriends. Even more so if there’s a little kid in the mix. Those screaming harridans who either want you to pose for a photo with their god-awful spawn, and get abusive when you don’t give them the royal treatment, or just walk up to you and knock you for six and have their dumb lunk of a boyfriend on standby to give you a beating.

This job is far from easy. You think it’s easy?

This job is only easy if you don’t do it properly. I do it properly. I take pride in my work. Not like you young guys. I’ve suited up all the way down the eastern seaboard. Ask Joe Palamaco down at the Marlins about me. Ask Gordie Dukenheiser at The Ballpark about me. Ask Sal Pazzi at the Coliseum about the job I do. I can work fifty-two weeks a year. I can suit up in twenty states. I’ve been doing this for seventeen years, and if you want to do anything in the mascot game, you should listen to me. I know I’m just some old crank to you, some has-been, but I know the mascot game.

Okay, you don’t want to do anything in the mascot game.

But even if you just do this for one summer there are ways to make your life easier. Preparation is key. The only thing you young guys prepare for properly is your dates. I’ve seen you. You don’t give two flying fucks about your job but you’ll spend an hour on your hair after the game. You’re what I like to call an HA: a half-asser. Most of the mascots out there these days are HAs like you. Dumb goofs in high school or college. Time was this was a serious job. There was a whole network of guys like me plying our trade across the whole country. It was a word-of-mouth thing. You built up a name and did good work and you could always find a job. I’m at the stadium an hour before suit-up time. An hour. Sixty minutes. You young mooks think you’re on time if you’re pulling in to the parking lot five minutes before you’re due to start. You were twenty minutes late last week – don’t think I didn’t notice. I didn’t say anything. It’s not down to me to keep you in line. But you turn up for work late, it reflects your whole attitude to the job. Half-assed. Before I clock on I walk the routes, inside and outside the stadium. I check the costume for fit and damage – and I carry my own repair kit with me. Sewing stuff, masking tape, superglue. Of course any major costume problems, stuff I can’t fix myself, I will have reported to the manager days in advance.

Are you listening to me?

I got into it straight after the war. Vietnam, you fucking idiot. How old do you think I am? Jesus. How much are you spending to be at that college each year? You can barely tie your own shoelaces.

I came back and I needed a job. I was staying with my aunt in Massapequa and I heard they needed someone up at the Coliseum. I – what was the war like? That’s a dumb question, even for you. It was terrible. Don’t ever go to war. And then when you come back, no-one wants to know. All these guys come back with no jobs and no future and no-one wants to hear shit about the war they just fought. So I ended up at the Coliseum. I liked the work, straight away. I liked the responsbility, the way it was down to me to do a good job, the way there wasn’t someone breathing down your neck the whole time. The way you could make the kids’ day so much better.

Then I made it down to Pittsburgh. Stayed there for the whole season, and they said they’d have me back the next year. Then back up to Jersey. I like moving around. By the time I get tired of a place, it’s time to move on. Nowadays people throw the word drifter at you. Like it’s a bad thing to want to keep moving and working and seeing the world. Not everyone wants to be tied down to a shitty little house and a fat wife and annoying kids. And not everyone who moves around to work is some kind of serial killer or something.

I mean, I’ve never really been a sports fan. I always found the games kinda boring. That’s another thing – people always say to me, you get to watch games for free.

I spend most of the game with my back to the players. I’m giving out candy to kids. I’m high-fiving people. I’m posing for pictures. I’m joining in on the cheers. Half the time I don’t even know what the score is.

Did you think you’d be spending your whole summer sitting on your ass watching baseball?

You hadn’t thought about it.

That doesn’t surprise me.

Good luck out there today, kid.